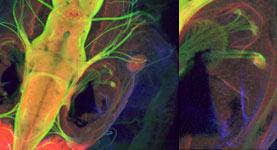 We take advantage of the conservation of developmental control of embryogenesis among organisms, to study the function of genes involved in congenital defects in humans by doing experiments with the frog Xenopus laevis. We take advantage of the relative ease of introduction of biomolecules like antisense oligonucleotides to reduce mRNA levels, or mRNA itself to make altered or increased levels of specific protein in live embryos. We then look for morphological and molecular changes that result. One of the techniques we use is whole mount immunohistochemistry coupled to confocal microscopy. Xenopus embryos develop rapidly and are small enough to use for confocal microscopic analysis that allows both the exterior and the interior of developing organ system to be viewed. Our most current studies look at how amyloids are used as part of normal development. The extracellular formation of amyloid particles is part of the pathogenesis that accompanies devastating diseases like Alzheimer's and Huntington's disease.

However, it is increasingly clear that the formation of amyloids, most commonly the formation of proteins into cross-beta strand structures rather than their active, native three-dimensional structure, may be non-pathogenic and even advantageous.  The best current examples of the formation of advantageous amyloid-like structures come from studies in yeast, where stress responsiveness and the ability to adapt to changing nutritional conditions are mediated thought the assembly and disassembly of amyloid-like structures.  The formation of amyloid-like structures were also critical for long-term memory in studies using snails and fruit flies.  As the features that allow a protein to form an amyloid as an alternative to it's active structure become better understood the surprising result is that at least 5% of known proteins meet the requirements.  We now know that in oocytes the nuclear particles where transcription and RNA processing occurs contain amyloids, and amyloids can be found in the nucleus and cytosol of the dividing cells of the early embryo. We are investigating what proteins are forming amyloids and how they are assembled and disassembled as part of normal development.